Agum is much better now and he can go on with most of his routines. It’s still a bit difficult for him to write with his right hand. Recently we received a visit from a physiotherapist from the Netherlands and he helped Agum with some basic exercises to do everyday to strengthen his right side of the body. 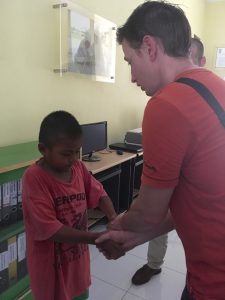 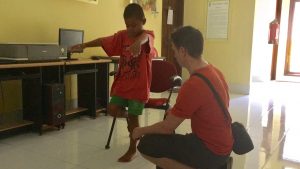 Agum starts with physiotherapy today. He’s able to move his lower arm and make a fist, but he struggles to move his fingers one by one.  His CT Scan Angiography shows that it is most likely his stroke is caused by preexisting condition of blod clog and not because of his fall. His relative also informed us that Agum has had stroke before at least three times. 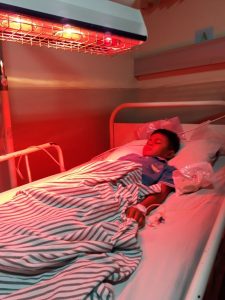 He was immediately taken to the hospital and after a CT scan result, he’s diagnosed with stroke, which caused his right side body paralyzed. He has to stay in the hospital for further tests and observation this week.

It is most likely that Agum will need physiotherapy after he is released from hospital. We need your help to cover hospital costs, medicine and physiotherapy that are estimated to be around Eur 2,000.

We have set up a fundraising page for our Indonesian donors at Kitabisa!.

For international donors, you can donate directly on our website by clicking the “Donate” button on top of this page or bank transfer , don’t forget to mention “Agum” in your note so we can set aside your contribution for his medical costs.

Thank you for your prayers and support. We will keep you updated on this blog for his current condition.